January 29, 2015
Marketing Daily’s coverage of Super Bowl advertising, contemplates the NFL’s domestic violence awareness PSA to run during the first quarter of the 2015 game. SLRG President Jon Last weighs in with his thoughts on the potential impact of the spot.
By Sarah Mahoney 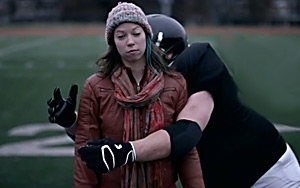 The National Football League is hoping that a startling new PSA, set to air in the first quarter of the Super Bowl, will a) get people talking about domestic violence, and b) help repair its still-wobbly credibility among women fans.

And it’s a good play: Thanks to the NFL, NoMore.org plans to air its latest PSA, a gripping bit of 911 drama whereby a woman calls for help by pretending to order a pizza.

While the ad is a first, marking the only time the league has devoted such precious airtime to domestic violence, it’s not likely to be the last. In fact, if many female activists have anything to say about it, the NFL will be playing defense on domestic violence for a long time — maybe even until chairman Roger Goodell goes away.

Advocacy group Ultraviolet — which flew #GoodellMustGo banners over stadiums last year — is back, and is purchasing #GoodellMustGo billboards on trucks that will circle University of Phoenix Stadium during the game.

“Violence against women is a huge problem, and the NFL needs to be a part of the solution,” says Karin Roland, campaign director for Ultra Violet. “The NFL has a role to play here, and under Goodell, more than 55 domestic abuse cases have gone unanswered. He’s gotta go.”

The group is also running a 15-second ad, showing a woman getting leveled by a football player, on SI.com.  “Let’s take domestic violence out of football,” it says, with the #GoodellMustGo tagline. (The site originally rejected the ad, and then relented.)

What’s interesting, observers say, is how strong a connection consumers see between the NFL and domestic violence. And while that connection existed even before last year’s Ray Rice scandal, it has certainly gotten worse. Yet many organizations have a higher-than-average rate of domestic violence problems, including undergraduate colleges, the U.S. military, and just about every other professional sports league.

So why can’t the NFL shake it? In a way, by pouring so much effort into PSAs, the league may, in a sense, be adding to its problem, says Sharyn J. Potter, a sociology professor at the University of New Hampshire who researches the effectiveness of anti-violence campaigns. “Like the pink-washing accusations made against groups regarding breast cancer, some people see these spots as pure PR.”

And every fresh scandal, such as Adrian Peterson pleading guilty to child abuse, then feeds that perception of hypocrisy. “It’s even clear to the undergrads I teach—kids who are 18 and 19—that what the NFL says about domestic violence breaks apart,” she tells Marketing Daily. “My students are very aware, for example, that someone likely to be a top draft pick this year was also accused of rape.”

Certainly, the NoMore spot, created by Grey Advertising, will have plenty of impact. “It’s highly emotional, without being alienating, and uses a real-life scenario instead of “talking heads” to draw attention to the issue,” says Whitney Dailey, supervisor of CSR Insights & Intel at Cone Communications. “And it has a clear call to action – take the pledge.”

Jon Last, president, Sports & Leisure Research Group, tells Marketing Daily that he’s glad the spot will get such a prominent showing during the Big Game. “I anticipate that there will be much discussion about it,” he says. But given the high production value of other Super Bowl spots, “while this PSA is quite dramatic, I’m concerned that absent close audience attention or greater frequency, it may not have its full intended effect.”

So while domestic violence may not be generating the same headlines this year as Deflategate or Marshawn Lynch, it’s still in the starting lineup, at least for many consumers. “The NFL is full of role models and people whom young men and women look up to,” says Roland. “It’s really important and it’s something we can’t ignore. Right now, the NFL has failed, and it doesn’t have the leadership to fix it.”