SLRG President Jon Last’s keynote remarks at the Summer Financial Communications Society breakfast are highlighted in a look at the financial services community’s involvement in a proliferation of sports venue naming rights deals. 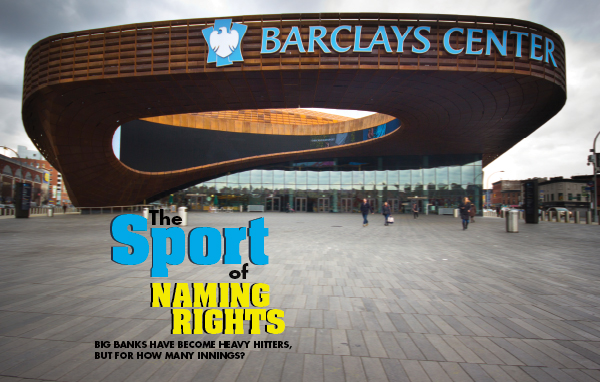 Sports sponsorship was the theme at a summer panel sponsored by the Financial Communications Society in New York. Jon Last, president and founder of Sports and Leisure Research Group, was the keynote speaker at the event, “Championing Your Financial Brand Through Sports Sponsorship.” Last said sports fans rank five times more influential than the general public. He also noted that media consumption rates run higher among sports fans and they seek out different forms of sports-related content. Sports marketing enables marketers to leverage a trusted heritage and insert their brands into a valued community, said Last.

Using sports as a corporate marketing tool is at least 100 years old, if not older. Two early examples are the beer-brewing Busch family of St. Louis, who named the Cardinals ballpark in St. Louis after the family moniker, and the gum-chewing Wrigleys, who did the same with their Chicago Cubbies. On another level, companies such as P. Ballantine and Sons, producer of Ballantine Ale, had Yankees announcer Mel Allen call a home run a “Ballantine Blast.” Another call was a “White Owl Wallop,” after the popular White Owl cigar. At iconic Ebbets Field in Brooklyn (named for owner Charles Ebbets), clothing store owner (and future Brooklyn borough president) Abe Stark had a billboard that said: “Hit Sign/Win Suit,” a premium prize at the time. The catch: the sign was placed in a position nearly impossible to hit.
Jump to the present and everything from replays to walk-off, game-ending hits to goals scored, touchdowns made and hoops hit, now has a sponsor. Perhaps the biggest change over the past few decades has been the emergence of financial firms as sponsors. As American affluence grew after World War II, brokerage houses and banks became an advertising force. Golf and tennis were two major beneficiaries, but in recent decades the major leagues have jumped on the bandwagon. Many venues now sport corporate names, in contrast with the old model of the team name.

On the Wrong Side of History
The process is not without some heavy cultural and emotional freight; the bigger the economic clout, the bigger the backlash can be when history goes wrong. The economic emergence of firms that became household names after World War II was accompanied by questions on the source of their growth. Allianz, for one, didn’t survive the vetting process in its quest to put its name on the New Jersey stadium being built by the Giants and the Jets in the Meadowlands. Allianz had reportedly supported the Nazi regime, to the detriment of their Jewish insurance policyholders. Allianz is hardly the only company to have wartime ties to the side that didn’t win, but its issue played out on the sports field, drawing criticism from Jewish organizations, Holocaust survivors and football fans. Ultimately, Met Life was named the stadium’s sponsor.
The financial meltdown of 2008 recast controversy to more current, but no less polarizing, issues. The New York Mets were criticized for cutting naming-rights deals with firms such as Citi. Previously, the Houston Astros changed their ballpark name from Enron Field to Minute Maid Park, rivaling Tropicana Field in Tampa for the juiciest-named venue. In Brooklyn, the new arena is named Barclay’s Center; in Newark, it’s Prudential Center or The Rock. And after numerous mergers, the venue for the NHL Philly Flyers and record-losing NBA Sixers is now Wells Fargo Center. In Boston, the Celtics and the Bruins call TD Garden – formerly the Fleet Center – home.

Chasing Glory
Some venues remain pure, meaning they keep the venue name but splash the exteriors and interiors with branding. The Madison Square Garden Co. and Chase expanded their marketing partnership, making Chase the “official card” of MSG and providing Chase credit and debit card members with exclusive access to events and experiences across MSG’s venues and sports and entertainment franchises. The long-term marketing partnership naming JPMorgan Chase as MSG’s first-ever Marquee Partner was announced in September 2010, making JPMorgan Chase the preeminent multi-platform, multi-venue, multi-media partner of MSG.
The multi-platform partnership is fully integrated across MSG’s sports, entertainment and media properties, and includes MSG’s iconic venues (Madison Square Garden, Theater at Madison Square Garden, Radio City Music Hall, Beacon Theatre, The Chicago Theatre), entertainment brands and events (Radio City Christmas Spectacular), professional sports teams (New York Knicks, New York Rangers, New York Liberty), regional television networks (MSG, MSG Plus), and digital platforms.
A central part of the relationship is Chase’s integration in Madison Square Garden Arena’s three-year remodeling of several signature elements, among them the Seventh Avenue entrance, which becomes Chase Square at Madison Square Garden, featuring interactive kiosks, new retail locations and a broadcast area. Two viewing platforms, called Chase Bridges, are to be suspended above the floor to offer an advantageous view. An exclusive space for event attendees, dubbed the 1879 Club presented by J.P. Morgan, opened as part of the first phase of the transformation.
At the summer panel sponsored by the Financial Communications Society, John Coombes of Liberty Mutual emphasized that brand awareness, in a competitive category, is the company’s biggest market challenge up, pitting them against Geico, Progressive, State Farm and Travelers. Liberty Mutual sponsors Team USA and said its CEO seeks positive reinforcement among its employees in terms of brand recognition. Liberty Mutual also sponsors FIFA and the World Cup on the fieldboards during games, and has sponsored an invitational, 70-event golf tournament that raises monies for various charities, over the last four years.
Downtown Brooklyn had already become a hub of activity before the advent of Barclays Center, with a new shopping mall, an upgrade to the LIRR terminal, and upscale condos and rental units in nearby communities. Barclays Center was the controversial aspect of the massive Atlantic Yards development, as it was located near an existing residential neighborhood.
Since its recent opening, Barclays has created noise and traffic problems, but has also increased the visibility of its prime tenant, the NBA’s Brooklyn Nets. The team relocated from the Prudential Center and will be followed in 2015 by the NHL’s New York Islanders, who are moving from the Nassau Coliseum.

Short-Term Impact Versus Long-Term Expectations
Sports sponsorships have morphed from the one-liner, brand-name endorsements of the 19th century to the big-time knock-on additions of real estate, shopping malls and all the other accessory enterprises, right down to kiosk hawkers of team memorabilia. Due to changes in the world of big bank sponsors, some venue names are up for grabs every few years, and sometimes on quick notice. This may be at odds with the long-term expectations of the retail and real estate developments riding on the coattails of sports teams. “There’s always next season” should probably be the disclaimer for any sponsor or community seeking long-term prospects. But for financial sponsors who can weather the volatility, sports endorsements are still a unifier.