As hybrid work situations are becoming more prevalent, a shift in consumer time allocation may enable the golf industry to finally make inroads on what has historically been a big participation inhibitor.

For as long as we’ve been studying golfer behaviors and attitudes, we have sought to understand the major inhibitors to greater engagement and participation in golf. 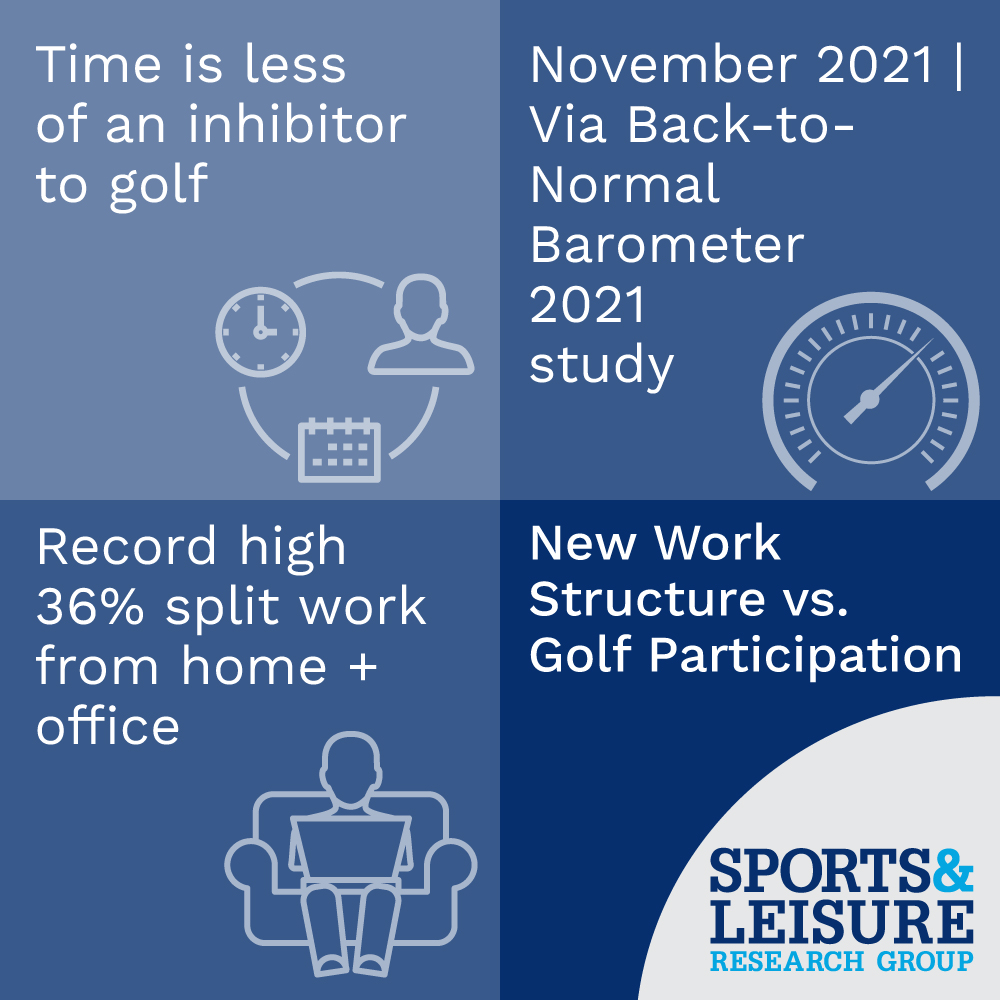 The two most prevalently cited challenges have always been lack of time and cost.  We’ve often derided these objections as crutches.  Firstly they aren’t particularly actionable.  We can’t provide golfers with greater income nor have we been able to give them more time to pursue the game.  But more critically, the objections of time and money fail to do more than scrape the surface.  Deeper research dives have shown them to be surrogates for the real underlying issues which have surrounded derived value, or perceived return on investment of time and/or money spent.

This was most poignantly illustrated in an in depth interview conducted several years ago in San Francisco with an affluent golfer who had disclosed that he also owned a vacation home in Lake Tahoe and a season ticket package for the San Francisco Giants.  When asked later in the interview why he didn’t play more golf, his push button response was that it was expensive and took a lot of time.  Challenging him on this in light of the previously cited investments in the vacation home and tickets, he surfaced what later was affirmed quantitatively as the true objection.  His remark was “There are no guarantees in golf.”  What he elaborated on among further probing, was an inconsistency of experience, referencing everything from pace of play to course conditions to his inability to show demonstrable skill improvement.  This eye opening insight has fueled a career long focus on seeking to better understand how individual golf facilities, OEMs and service providers can put that guarantee into golf.  Circling back to the issue of time management, the question remains how can we make the hours invested in golf, show a positive ROI?  As long as potential customers have felt time and cost pressure, golf has battled alternative forms of diversion and leisure options for those precious commodities. If those yield greater ROI, golf loses share of customer.

Fast forward to our current pandemic altered environment, and we can apply the above learnings to the recent surge in participation.  We and others have shown at length how golf solved for many of the heightened inhibitors for alternate activities that golf avoided. Activities like golf, which saw relatively little disruption and successfully positioned itself as a socially distant, safe, outdoor activity, particularly benefited from this In the early days of lockdowns and cancellations. During that time period, our research actually showed a perceptual reversal from people not having enough time to do things that one wanted, to not having enough things to do that could comfortably occupy one’s time. Now, we’re finding qualitative and quantitative evidence that the relative time flexibility afforded by work from home and hybrid situations is something that sports minded consumers are not about to give up.

As we continue to track ever evolving attitudes and behaviors in our Back to Normal Barometer, an interesting phenomenon has emerged in the data.  It appears that to an extent, the previously immovable obstacle of finding more time to engage in sports, or any leisure activity has potentially been transformed.  In the wake of the COVID pandemic, Americans have regained greater control over their time.

As a case in point, our most recent, late October wave of research shows a new high water mark of 36% of active Americans presently splitting their time between work at home and their usual dedicated work place outside the home.  And while those working exclusively outside the home, has more than doubled from where we were in June of 2020, an additional third continue to work primarily from home, with sub segments extending the remote work concept to facilitate “stay-cations” or other opportunities to work from “anywhere.”  Add to this the fact that 2/3 of  respondents in the most recent wave of research, strongly agreed with the statement “The ability to work from home is something that I value or would value from my job,” and it is not a reach to suggest that as we come out of the pandemic, work situation flexibility is an important part of the emerging new normal that has contributed to fueling what many are labeling “the great resignation.”  With the elimination or reduction of time commuting and a greater ability to intertwine business and leisure, there is now more opportunity to balance the work day around preferred leisure pursuits like golf.

This, of course, doesn’t solve for the challenge of providing strong value and return on time investment.  That is a function of better understanding the specific needs of the customer segments of those frequenting your golf facility.  However, it does suggest time pressure may not be as great of a perceived inhibitor to golf participation as it was, just 20-24 months ago when the industry was still mired in flat to declining participation trends that may seem to be a forgotten or distant memory for many of us enjoying the recent participation surge.